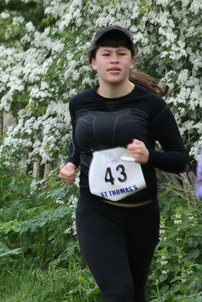 Immani Burnham winner of under 18 Girls 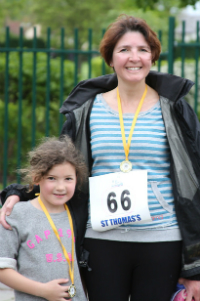 Holding this kind of event for a second time is always a gamble.  Will the novelty have worn off?  Will we get enough volunteers?   Will the weather hold out?  These are the worries that haunted me in the small hours over the last few weeks.  However, I should have slept easy, because in the end, we had 80 runners and walkers, a host of lovely helpers and with the power of prayer, the rain stayed away.
By 1.45pm, the car park of St Thomas’s Church was filled with excited runners waiting to go, so after a quick briefing about the course and the time-keeping  (this time with a megaphone), our participants set off down towards the vicarage.  The whistle blew and they were off - back up the road toward the park, ably directed by Natalie and then Sheila.  Once into the park, Gill saw them heading around towards Rosemary, who sent them, via Chris and Julie, towards the playing fields.  Caroline and John made sure they didn’t disappear down Southdown Avenue or into the woods and Jono from his perch on the deer statue kept them on the straight and narrow towards Tom, who stood between the path and the canal.  Keith sent them back up a challenging little hill towards Alan (and Poppy the dog).  Then it was back into the park, directed by Tilly and Andrew round to Christine and then to Sue.  The runners then had to go round the bandstand and Frances and Nicole were there to make sure this went smoothly.  Finally back to Sarah, who sent our runners back to Gill who sorted the 5K’s from the 2.5K’s out and sent them off for a second lap or out of the park towards the finish.
And so it was that less than 1 hour later, all 80 hot, tired but happy runners and walkers had returned to St Thomas’s for water, squash, bananas (not jelly babies and we hear you – we’ll make sure we have some for next year) and a well-earned medal.
As well as our lovely marshalls, there are a host of people at race HQ who worked tirelessly to run this event.  Davina, our resident first aider was there in case of any mishaps; Sarah and Jerry did a stirling job of the time-keeping and Caroline made sure all the lists were updated as runners returned.  Sarah C and her bike, made sure all the marshals were in the right place and then let them know when the race had finished and Andrew took some great photos – they’re on the St Thomas’s website – just go to galleries and click ‘web’ or click here.  A huge thank you to Sarah Holroyd – acquirer of vast quantities of bananas, time-keeper, administrator, refreshment organizer and the rest.
Finally thanks to everyone who took part whether you walked or ran, you helped to raise £400 for St Thomas’s Church.   Will we hold another one?  I rather think that St Thomas’s Fun Run is going to be an annual event now and with a little tweeking around the edges, we’ll make it even better next time, so watch out for details in future issues of our Parish magazine.