Our building | The art and architecture of St Thomas's Hanwell 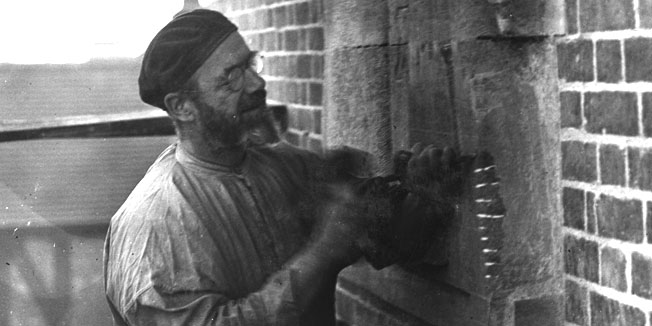 'The beauty of God is the cause of the being of all that is'. Eric Gill after Thomas Aquinas. Eric Gill carving the Calvary 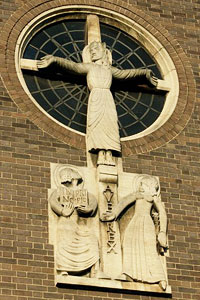 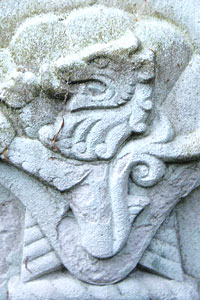 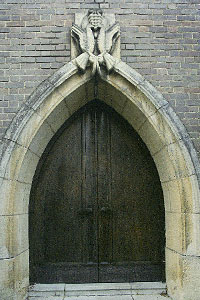 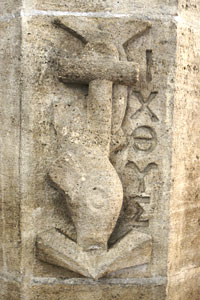 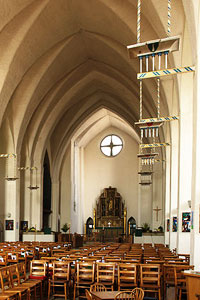 In addition to this introduction a comprehensive guide to the art and architecture of St Thomas the Apostle Hanwell is available for download in PDF format. And please see our Galleries section for many more images of the church, showing most of the items referenced on this page and in the guide.

St Thomas's is a Grade 2* listed building. Edward Maufe won the competition for Guildford Cathedral in 1932. His reputation as a church architect had hitherto rested on restoration work at AIl Saints, Southampton and St Martin's in the Fields; and on two churches for the Royal Association for the Deaf at East Acton and Clapham, and - most notable - a well respected 'Clubland' Methodist chapel in Walworth which was bombed in the war.

Work on Guildford Cathedral did not begin until 1936. In the meantime Maufe designed St Thomas's, for which the foundation stone was laid in July 1933. Completed in 1934, the materials used were an experiment with the form of construction proposed for Guildford. They were the load-bearing silver grey Tondu brick from South Wales and particularly the reinforced concrete vault Iined with acoustic plaster. Many of the interior details are also similar to Guildford Cathedral: most notably the tall lancets and narrow aisle passages with the acutely pointed arches, but also the style of some of the fittings and the employment of Eric Gill as one of the sculptors.

The large Calvary that arrests attention from the road is by Eric Gill, its cross forming the tracery of the East Window. This was carved 'in situ' from a single Weldon stone block. The carving over the north door is the work of Vernon Hill, depicting a dove with the girdle of Our Lady that was sent to St Thomas. To the left of the door, almost at ground level, the seal of Edward Maufe can be seen.

The wave pattern to the brass kicking plates on the doors represents the sea. Inside the north porch is a carving of St Matthew by John Skelton (nephew of Eric Gill).

The carving over the west door is also by Vernon Hill and represents two birds pecking from the same bunch of grapes symbolic of all Christians sharing the one cup at Communion.

'Inside the feeling is of a great church exquisitely miniaturised. Indeed, it has frequently been said that Maufe's distinctive and austere style was better suited to the small scale than to a cathedral. Moreover, St Thomas's substantiates Pevsner's admission that Maufe was "a man with genuine spatial gifts". The initial impression is of a nave and chancel of equal height given semblance of religious presence by narrow passage aisles cut into the thick piers of the vault, Alibi style. The east end is more complicated, however, One becomes aware of a cross axis along the front of the chancel, and another in front of the sanctuary itself On the south side there are vestries and a kitchen: on the north side another door, a Morning Chapel, now called the Lady Chapel, and between them a little Children's Corner or chapel set within the thick walls of the tower. There is a small space behind the sanctuary, reached through the arches.'

At the west end of the church is the font, which was also carved by Vernon Hill in Weldon stone. It depicts a fish and anchor and the ICQUS cypher which are all signs for Christ. The stained glass behind the font, depicting 'Christ and the children', is by Moira Forsyth. The War Memorial came from the 'tin church', which used to stand where the Parish Hall now stands.

In the Nave, the light fittings are plated with silver and bear the arms of the twelve apostles. The original foot-long candle bulbs are now unobtainable and have been replaced with a modern energy saving equivalent.

The flooring is linoleum and was originally buff in colour and marked out with blue lines. The sign of St. Thomas the Apostle - a builder's square and three spears - can be seen on the churchwardens' staves and various other places in the church. The square indicates that Thomas was a builder and that spears were the instruments of his martyrdom. 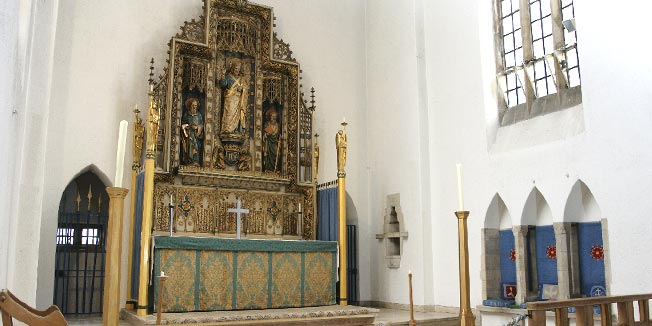 The timber screens in the chancel are decorated with angels, each playing a different instrument. They were carved by James Woodford. The cross and candlesticks on the altar were designed by Edward Maufe and made by The Artificers Guild. The architect also designed the sanctuary carpet. The floor of the chancel and sanctuary is of travertine marble.

The blue colour used in the reredos is typical of the architect and reproduced throughout the church. Edward Maufe, apparently, did not like purple, which is why the Vestments and hangings used for lent are grey and blue.

The Children's Corner (or Chapel) also has glass by Moira Forsyth, and an interesting nativity scene featuring the church, behind the altar, painted by Elizabeth Starling. The wooden carvings over the screen, representing 'flesh, fruit, fish, flower, and fowl' are also by James Woodford.

The Morning Chapel (now often called the Lady Chapel) ceiling was painted by Kathleen Roberts. The Madonna and child is in Caen stone carved by Vernon Hill and the cross on the altar and the sanctuary carpet and altar posts were designed by Edward Maufe.  Unfortunately, the cross depicted on the right was stolen in May 2004 and we pray for its' safe return. 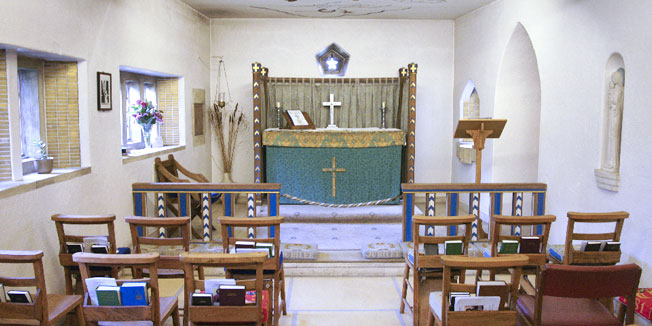 In 1995 the 'acoustic plaster' used, during the original construction, to line the church interior as an insulator and soundproofing material, was found, in fact, to be both blue and white asbestos.

After a prolonged programme of congregation and community fund-raising, supported by the Heritage Memorial Fund and the Diocese of London, the asbestos was removed over a six-month programme in 1999 at a cost of over £330,000. During this time our services continued as normal in the Parish Hall.

An ongoing programme of restoration works continues to return St Thomas's to the original 1934 decoration. The second phase of the restoration works, which included redecoration, was completed in June 2002 and cost  over £50,000. We have now also, thanks be to God and the generosity of both the Heritage Memorial Fund and countless selfless donations been able to complete (September 2004) the replacement of the original copper roof at a cost of over £170,000.

Hopefully, as funds permit, the original linoleum floor will be replaced as per the original. Latest estimates put this work at around £50 to 60,000, so we will have to live with the old floor for some time yet! At the same time we can improve the inductive loop which was recently installed.

Our next job is to improve 'step free' access to all public areas of the church.

It is thanks to the continued support of our local community that all of the works have been achieved, with His guidance. St Thomas's continues to be at the heart of our community and, like a beacon, shows our love for God and His House.